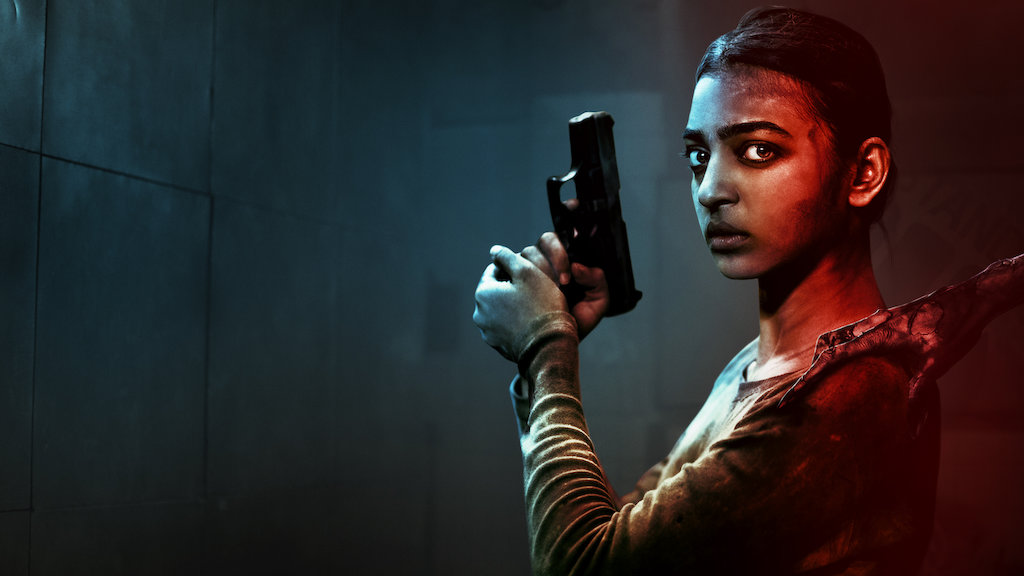 The story is set in India in a dystopian future where fascism is at its top, and the story’s main plot is the interrogation of a dreaded terrorist Ali Saeed in a secret government internment camp that ignites a series of horrifying and supernatural events in the aftermath. Radhika Apte plays the main character Nida Rahim supported by Manav Kaul, Ratnabali Bhattacharjee, S. M. Zaheer, Mahesh Balraj, Rohit Pathak and Mallhar Goenka in prominent roles.

The miniseries was conceived based on a dream Graham had had. Originally meant to be the first of 3 films in a deal between three production houses, Netflix acquired the production in February 2018 after Graham felt that a longer format would be better and had it turned into a miniseries. Ghoul released to positive reviews from critics, with praise to the performances and storyline.

Nida Rahim (Radhika Apte) is a newly recruited military officer who is fiercely loyal to the authoritarian regime and is ready to go to any limit to prove her faith in the existing system to cleanse the society for a better future. She is appointed at a covert military detention centre to interrogate Ali Saeed (Mahesh Balraj), the most dreaded terrorist who has been recently captured and brought in for interrogation. However, he turns the tables on his interrogators, exposing their most shameful secrets. Rahim comes to the conclusion that Ali Saeed is not from this world and is possessed by some supernatural entity.

When a new prisoner arrives at a military detention center exhibiting eerie behavior, young interrogator Nida Rahim searches for the truth. Her quest becomes a battle for survival when the prisoner, sect leader Ali Saeed, turns the tables on Nida and the other interrogators, exposing their most shameful secrets. Nida ultimately discovers a ghoul inhabiting Saeed and — after telling her colleagues about it — learns the alarming truth about what its presence reveals.

Originally, ‘Ghoul’ was supposed to be a film. However, when Netflix got indulged, they asked it to be turned into a series. The story was adapted according to that. Even though the series ended on a cliffhanger, it was conceived as a standalone story. Moreover, if Netflix wanted to renew it, they would have done so a lot earlier. Even with a follow-up, the first season has brought its story to a conclusive end. But who knows, maybe there is something secretly cooking inside the headquarters of Netflix and we might get to know what happens next with Nida. Whenever we receive any news on Ghoul season 2 release date, we will update this section.

The Netflix mini-series is based in a dystopian world where the state believes in controlling the minds of the children by obstructing free-flowing information, especially through books. The story of this horror-thriller follows a young woman named Nida Rahim (Radhika Apte), a trainee soldier in National Protection Squad’s Academy (NPA), and her father Shahnawaz (S.M. Zaheer), a professor who encourages his students to question government rules and policies.

Nida, who has grown under the influence of the state considers this questioning as an anti-nationalist act. Driven by her deep-seated beliefs and love towards her country, she turns her father in to the authorities. Later, she finds herself posted with Lieutenant colonel Sunil Dacunha (Manav Kaul) in a remote military detention centre in Meghdoot 31, where they interrogate a notorious terrorist, Ali Saeed Al Yacoub (Mahesh Balraj), a leader of United People Front.

With this ongoing cross-examination, a series of events unfold, bringing to light the past and the baffling interplay between mortal and supernatural worlds.

There are two sides of this narrative, one is political which is essentially a comment on religion, the state and anti-nationalism. Wherein, the other side of the tale presents the most intriguing aspect, that is horror.

The starting of the series is cemented in real world but as the series progresses, the events take a different turn making one feel the presence of supernatural elements as well.

Written and directed by Patrick Graham, the series starts off on a slow note and takes time to build-up, setting up the backstory and the context. Besides its unpredictability, Ghoul also has a deeper political and philosophical nuance to it which despite its supernatural nature, makes you think who the real evil is.

As a three-episode series, it is nicely developed and paced with each episode leaving you wanting more. The intensity of the narrative and the environment are aptly captured and enhanced by the cinematography, lighting and set design. Overall, it’s a well-written plot which is beautifully showcased.

Radhika Apte’s performance is captivating and she leaves no stone unturned to make you feel the upheavals that her character goes through. Manav Kaul barely looks like a man in charge and does not pull off his part so convincingly. The rest of the cast does a fine job in supporting the lead characters.

In a nutshell, Ghoul is a unique and gripping, with a twist that will leave you surprised.

The story is set in India in a tragic future where extremism is at its top, and the story’s principal plot is the cross examination of a feared psychological militant Ali Saeed in a mysterious government internment camp that lights a progression of alarming and otherworldly occasions in the outcome. Radhika Apte plays the principal character Nida Rahim upheld by Manav Kaul, Ratnabali Bhattacharjee, S. M. Zaheer, Mahesh Balraj, Rohit Pathak and Mallhar Goenka in noticeable jobs.

The miniseries was imagined in light of a fantasy Graham had. Initially intended to be the first of 3 movies in an arrangement between three creation houses, Netflix obtained the creation in February 2018 after Graham felt that a more drawn-out organization would be better and had it transformed into a miniseries. Devil delivered to positive audits from pundits, with commendation to the exhibitions and storyline.

Nida Rahim (Radhika Apte) is a recently selected military official who is wildly faithful to the dictator system and is all set as far as possible to demonstrate her confidence in the current framework to purify the general public for a superior future. She is delegated at an incognito military confinement community to grill Ali Saeed (Mahesh Balraj), the absolute most feared psychological oppressor who has been as of late caught and acquired for cross examination. Be that as it may, he reverses the situation on his examiners, uncovering their most despicable mysteries. Rahim reaches the resolution that Ali Saeed isn’t from this world and is moved by some heavenly substance.

At the point when another detainee shows up at a tactical confinement place displaying frightful conduct, youthful questioner Nida Rahim looks for reality. Her mission turns into a fight for endurance when the detainee, group pioneer Ali Saeed, reverses the situation on Nida and different examiners, uncovering their most dishonorable privileged insights. Nida eventually finds a devil occupying Saeed and – – in the wake of enlightening her partners – – learns the disturbing truth concerning what its essence uncovers.

Will there be Ghoul Season 2

Initially, ‘Ghoul’ had to be a film. Notwithstanding, when Netflix got reveled, they requested that it be transformed into a series. The story was adjusted by that. Despite the fact that the series finished on a cliffhanger, it was considered as an independent story. In addition, to reestablish it, they would have done as such significantly before. Indeed, even with a development, the principal season has finished its story. Be that as it may, who knows, perhaps there is something subtly cooking inside the offices of Netflix and we could get to realize what occurs next with Nida. Whenever we get any news on Ghoul season 2 premiere date, we will refresh this part.

The story, if renewed might witness the journey ahead of Nida and the struggles of living in a dystopian world. It is expected to be more intriguing and engrossing and is much awaited.

The Netflix small scale series is situated in a tragic reality where the state has confidence in controlling the personalities of the youngsters by blocking free-streaming data, particularly through books. The account of this ghastliness thrill ride follows a young lady named Nida Rahim (Radhika Apte), a learner officer in National Protection Squad’s Academy (NPA), and her dad Shahnawaz (S.M. Zaheer), an educator who urges his understudies to address government rules and arrangements.

Nida, who has developed affected by the state thinks about this scrutinizing as an enemy of Patriot Act. Driven by her well established convictions and love towards her country, she hands her dad over to the specialists. Afterward, she ends up posted with Lieutenant colonel Sunil Dacunha (Manav Kaul) in a far-off military confinement place in Meghdoot 31, where they examine a famous psychological oppressor, Ali Saeed Al Yacoub (Mahesh Balraj), a head of United People Front. With this continuous questioning, a progression of situation unfurls, exposing the past and the confounding transaction among mortal and heavenly universes.

There are different sides of this account, one is political which is basically a remark on religion, the state and against patriotism. Wherein, the opposite side of the story presents the most charming viewpoint, that is loathsomeness. The beginning of the series is established in genuine world yet as the series advances, the occasions go in a new direction causing one to feel the presence of otherworldly components too.

Composed and coordinated by Patrick Graham, the series gets going on a sluggish note and invests in some opportunity to develop, setting up the origin story and the unique circumstance. Other than its eccentricism, Ghoul additionally has a more profound political and philosophical subtlety to it which notwithstanding its extraordinary nature, makes you think who the genuine evil is.

As a three-episode series, it is well evolved and paced with every episode leaving you needing more. The power of the story and the climate are eye-catching by the cinematography, lighting and set plan. Generally speaking, it’s an elegantly composed plot which is wonderfully displayed.

Radhika Apte’s presentation is charming and she investigates every possibility to cause you to feel the disturbances that her personality goes through. Manav Kaul scarcely resembles a man in control and doesn’t pull off his part so convincingly. The remainder of the cast makes a fine showing in supporting the lead characters.

More or less, Ghoul is an extraordinary and holding, with a contort that will leave you amazed.