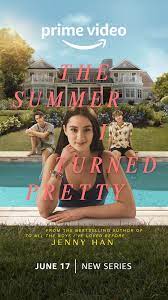 The Summer I turned pretty is a recent tv series that premiered on Amazon Prime video, on the 17th of June, 2022. The show is based on a novel by the same name which is written by Jenny Han. It has a total of seven episodes, with each having a duration of between 45-50 minutes. Jenny Han has previously also written the novel series “To all the boys I have loved before”, and then I turned pretty series is also a trilogy, and the tv show has also been renewed for a second season.

The plot mainly revolves around a sixteen-year-old girl named Belly, who is navigating through life-changing events over the summer of her sixteenth birthday. The Summer I Turned Pretty, the film adaptation of Jenny Han’s young adult novel of the same name, is so foreordained that you want to bite your arm in annoyance. Adding insult to injury is the fact that it is poorly written and the performance is much worse. However, there is something to be said for a dull show that includes attractive people, the sun, sand, and the sea, as well as a fairly stunning beach house and a bubblegum soundtrack, maybe to make up for the fact that it has poorly been executed. All of that adds up to a watchable if brief, show.

Bella (played by Lola Tung), has been visiting Cousins Beach and the villa of her mother’s best friend Susannah and her family, every summer since she was a toddler. She stays with her brother Steven (played by Sean Kaufman) and her mother, Laurel (Jackie Chung).

Susannah’s kids Conrad (Christopher Briney) and Jeremiah (Gavin Casalegno) are an intrinsic part of Belly’s lives. Belly always had a crush on Conrad. Like each summer she visited Cousins this year as well. However, it’s different this summer because Belly turns 16 and is much prettier than anyone could have anticipated. Conrad is depressed, Steven is anxious about getting into school, there is a debutante ball, Susannah appears exhausted and is smoking a lot of marijuana, and Laurel is having writer’s block. Only on the Fourth of July weekend do the husbands join in on the celebration.

ALSO READ: Falling Into Your Smile Season 2 Release Date: Is The Show Renewed Or Not?

This year, Adam (Tom Everett Scott), Susannah’s husband, shows up despite Susannah forbidding him from going, while Laurel’s ex-husband John (Colin Ferguson) brings his girlfriend. Other characters include the affluent influencer Shayla (Minnie Mills), who has affections for Steven, the fellow author Castillo (Alfredo Narciso), for whom Laurel might have feelings, and Cam (David Iacono), the kind boy who loved Belly from their time together as Latin geeks, and other people.

As the show goes on, it gets weirdly predictable. The poor acting and the poorly executed script give away the events, and it becomes incredibly boring. We could not be invested in any of the characters and so the ending, however horrible it is didn’t hurt as much. Unfortunately, not even Taylor Swift’s finest songs can make up for the romances on show’s romances’ lack of spark. It’s a delightful touch of desire fulfilment and a particularly predictable one that practically every boy in The Summer I Turned Pretty falls in love with Belly.

In particular, because the young actors in the series are all the stuff of high school crushes: Casalegno’s Jeremiah is all exuberant boy-ness, David Iacono’s Cam is all endearing nerdiness, while Briney’s Conrad is characterised by a hot-and-cold moodiness that my adult self finds incredibly annoying but that my much younger self would have swooned over. The narrative, however, also puts every other teen character besides Belly in an odd holding pattern.

Then there is the classic torment of “who should I choose to be my boyfriend”. Belly in the end chooses Conrad, which was a bummer, but let’s be honest, we all saw it coming.

If you still want to watch the show, well you can obviously, and here’s to still hoping the second season serves better.

MUST-READ: The Mick Season 3 Release Date: What Is The Latest News!

In this article:The summer i turned pretty