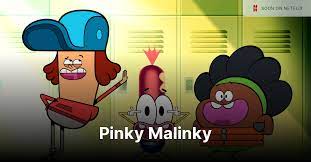 Pinky Malinky is an animated television series that has been created by Chris Garbutt and Rikke Asbjoern. It was made to be streamed on Nickelodeon and the OTT platform Netflix. It is based on Garbutt’s animated short story by the same name. The short story was Cartoon Network Studios Europe which was released way back in 2009. It also happens to be the first collaboration between Nickelodeon and Netflix and is also the first Nicktoon to be produced exclusively for Netflix.

The series first premiered on January 1, 2019. And then, it was renewed for a second season that premiered on April 22, 2019. Then the third and the final season was released on July 17 2019. The series was cancelled after the premiere of the third season. Hence, there would not be any more seasons for Pinky Malinky. Let us now talk more about the show and its characters.

The series revolves around a 12-year-old Middle school student Pinky Malinky (who is voiced by Lucas Grabeel), and his adventures. He also happens to be one anthropomorphic hot dog turned into it under some mysterious circumstances. The series also shows his efforts to move up the ladder of social inclusion with his two human friends named Babs Byuteman and JJ Jamesman. The two best friends try to figure out how to make their kind-hearted friend’s life easier as he tries to live everyday life with an abnormal body.

This show has also been nominated for the “Best Animation Editing” for the 2020 Daytime Emmy Awards that were held on May 21, 2020.

Nickelodeon greenlit the series for a 20-episode pickup in 2015. The series was supposed to premiere on Nickelodeon in 2016, but there have been numerous delays. Pinky Malinky will be released exclusively on Netflix on June 21, 2018, and the show has been renewed for a second season. The company’s See What’s Next Twitter account announced a release date of August 17, but the series did not debut on that date. On September 16, 2018, Chris Garbutt announced on Instagram that there had been a slight delay in the release date and that it was up to Netflix to decide when to release it.

And other cast members include Danny Jacobs for Mr Malinky, Retta for Mrs Malinky, Lauren Tom for Bus Driver, Tina, Flula Borg for Byonk, and many more. The accumulation al all these different people adds a lot of flavour to the show.

Ever since 2019, the fans have been eagerly waiting for the fourth season. However, unfortunately, the show was cancelled after its third season premiered in 2019. It was because all three seasons covered the whole plot, so there was nothing left to cover anymore.

Since there will be no fourth season, it is futile to wait for the announcement for one. However, all the other three seasons are available to be streamed on Netflix.