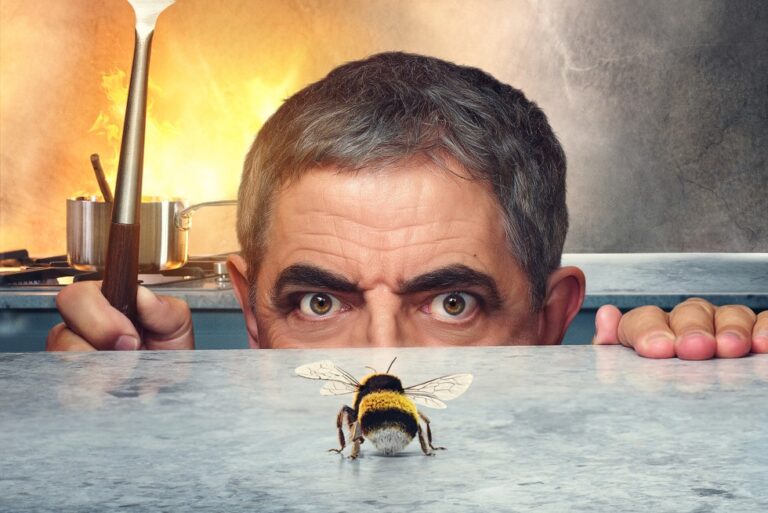 Man v Bee is a comedy series that has been created by Rowan Atkinson and written by William Davies. The series is a nine-part series. The plot revolves around a simple man never, Trevor, who is a house sitter. He is now tasked with overseeing a very luxurious mansion that is filled with precious artwork. The plot thickens when he starts being tormented by a mischievous bee. He gets so irritated by the Bee that in an attempt to kill the Bee, he causes some significant damage and destruction to the expensive building. There are a lot of subplots as well, involving an allergic pet dog and some pretty idiot thieves.

It is being speculated that the series is rather an unofficial remake of the Tamil Blockbuster movie Eega which was released in 2012. The series Man v Bee premiered on Netflix on the 24th of June, 2022.

The first season was quite hilarious and a light-hearted comedy. It was binge-worthy as well. The episodes are sweet and very easy to understand as well, with their duration ranging from ten to twenty minutes, thus not overstaying their welcome.

In this goofy slapstick series, Rowan Atkinson is clearly at the top of his game, utilising all of his comedy experience to deliver an unforgettable performance as the buffoonish father and hopeless house sitter. This kind of show has great potential to have any seasons, but will it be renewed, or is it cancelled?

As of now, there has been no announcement for another season, i.e., season two of it. It is still pending at the Netflix headquarters, and they have not said any word regarding it. So, we don’t know whether the show is going to be renewed or not. However, as mentioned earlier, there is definitely considerable potential for this show to become a long-running series.

Season 1 ended with Trevor freshly released from the jail after helping the police arrest the actual criminal- Christian, the homeowner himself. He himself orchestrated the whole thing. He hired three thieves to rob his own house, the house which was full of fake art pieces. When this truth came to light, Trevor was immediately released, and then he went on his dream holiday with his daughter Maddy to the isle of Wight.

The show ended with Trevor fighting the infamous Bee, which is also a significant character in the show. It seemed like the Bee followed them on their holiday as well. Trevor, already forgotten his bad tactics and past mistakes, attacks the Bee with the same intensity and rage as before.

There is a lot of potential for the premise, for there to be a lot of seasons. Trevor and his insanity to fight the Bee, and the Bee is always up with some shenanigans. Trevor can keep fighting the Bee anywhere and anytime, leading to an array of laughter. The setting can be taken and made into any story to get maximum effect.

Now for the status: There is no confirmation of a season 2 at this time. On paper, you could argue that there is no reason for this. After all, this first season does about as much as anyone can with this central premise, and we believe that over time, you run the risk of making it less fun. In general, some of Atkinson’s most well-known work (including Mr Bean) does not last long.

However, because this is Atkinson and he has a global following, there is a chance that this show will return. Remember that one of the things Netflix is focusing on these days is global expansion. They’re not going to be satisfied with just being popular in a few countries; why would they when they can travel the world? Rowan doesn’t even rely on dialogue that much of the time, which allows him to break down language barriers more quickly than many other comic performers.