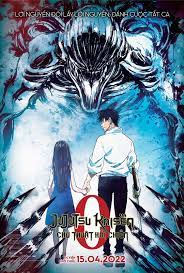 On the 30th of June, 2022, Jujutsu Kaisen 0, the movie, was released all over India. Jujutsu Kaisen 0 (Japanese 劇場版 呪術廻戦 ) is a 2021 Japanese movie that was released in Japan in 2021. The movie is a dark, fantasy, animated movie which serves as a prequel to the Jujutsu Kaisen manga and the anime series. Both the manga and the movie were created by Gege Akutami. The movie was directed by Sunghoo Park and written by Hiroshi Seko. The film stars Kana Hanazawa, Mikako Komatsu, Megumi Ogata and Yuichi Nakamura and many more.

The movie follows a young boy named Yuta Okkotsu, who becomes a sorcerer and tries to control and channel the cursed energy inside him, which is the cursed spirit of his childhood love Rika Orimoto. He is taken to Jujutsu High by Satoru Gojo, who is the most powerful jujutsu sorcerer in the world. The story focuses on Yuta and his other sorcerer friends who try to stop Suguru Geto from trying to get rid of the entire existence of normal people. The story also has subplots of love involving Yuta and Rika and the side of friendship between the sorcerers.

Jujutsu Kasien 0 was released in Japan in December 2021 and in The United States in March 2022. It came to India on the 30th of June 2022. The PVR cinema’s official Instagram account also posted about it, and the Indian JJK fans got to know about it. The movie has been highly praised by various critics for the animation, the action scenes and the romance involving Yuta and Rika.

Keep reading to know what we have to say about the movie and warning there are spoilers ahead.

The movie begins with Yuta being bullied by his classmates, and then the bullies are killed by Rika, who he calls Rika-chan. Rika is an overly protective cursed spirit who has been with him ever since she died when they were both children. The other sorcerers want him to be executed, but Satoru Gojo convinces them to let him stay at Jujutsu high. Yuta tells them that Rika was his childhood friend. One day she told him that they should marry once they were grown-ups, so they would be “together, forever and ever.” Then she meets with an unfortunate accident, in which her head gets crushed in, so she dies. Yuta said he wanted to die so Rika won’t be able to hurt anyone else.

On a mission with Maki, Yuta manages to purposefully summon Rika in order to fight the other cursed spirits. Then he, later on, tells Gojo that he might be the one who cursed Rika and not the other way round. He said he felt guilty and would do anything to set her free from the curse. He trains there at Jujutsu High for three months. Soon enough, Gojo’s past best friend and present biggest enemy, Suguru Geto, declares an open war, saying, “let us curse each other freely”.

Geto wants to take Rika into his possession as she is the most powerful cursed spirit at that time. So, he decides to kill Yuta. Then there is a big fight that involves all the sorcerers from all over the world.

Here, we see a very tear-jerking scene; Yuta had offered to go with Rika so they could truly be “together, forever and ever.” Then her curse breaks off, and we see Rika in human form again. She tells Yuta to stay on earth and that she will meet him later. Towards the end, Gojo says, “Love is the highest form of curse.”

The fight scenes showed the highest form of friendship, and the portrayal of unbreakable bonds was very pristine.

Rika reverts back to her human form. Gojo explains to a surprised Yuta that his theory was correct: he cursed her, unable to accept her death and forcing her to stay by his side. He broke the pact after promising his soul to her, freeing her. Yuta is a descendant of one of history’s most powerful sorcerers, which explains his extraordinary abilities. Gojo is a descendant of the same sorcerer, so the two are distant cousins. Rika bids Yuta a fond farewell, and he continues on with his friends as a sorcerer-in-training, still wearing her engagement ring.

The story does an immaculate job of cueing the viewers in the mesmerizing scenes. The anime is very beautiful. The last half-hour scenes are so precise and impeccable. The animation and the fight sequences make the time and the wait worth it. At times, when we saw Rika and Yuta’s past scenes, it got emotional as well.

The action sequences, like the series, are expertly crafted and leave the viewer satisfied but wanting more. It crescendos the action sequences and threats, culminating in a powerful crash. Personal favourites include the fight scenes involving Kento Nanami and Mei Mei, which elicited applause from the theatre audience. Another feather in the film’s cap is the increased screen time given to the villain Suguru Geto (Takahiro Sakurai), who believes that only Jujutsu Sorcerers should exist in the world and that all humans must die. It’s interesting because Jujutsu Kaisen 0 fleshes out his motivations, which were previously largely unknown, and Geto is such a witty and effective antagonist.

The makers definitely knew how to reel the watchers in their captivating cinematography, the scenes, the colours and the amazing execution of the storyline. At times, the movie does become macabre and dark, but it is still heartfelt, as there are undertones of love, friendship and longing as well. The movie did not bore the watchers with the introductions either. It can be called a prequel or a remake for the similarities, whatever you want to call it, this 105-minute film hits many of the same notes as the show by introducing the audience to the world of Jujutsu sorcery and Cursed Spirits, among other things.

The show shows the importance of friendship, and Yuta’s arc shows us the importance of letting go of the past he has been holding on to for so long. His choices in regards to Rika are moving, but longtime fans will likely find a lot of satisfaction in the ways the film sticks to a compact, efficient version of the franchise’s ideas, whereas the anime series delves much deeper into its philosophical messages. And, by keeping things simple, the film entices viewers to want more, pointing them toward the TV show. It’s one of those rare movies that has something (awesome) for everyone.

Few prequels manage to do what Jujutsu Kaisen 0 has done here: create a satisfying standalone story with no tangential or tedious connections to the canon. And for that reason alone, it should be on every anime fan’s end-of-the-year list. If you still haven’t watched the movie, we suggest you do. Jujutsu Kaisen 0 is running in the theatres currently.