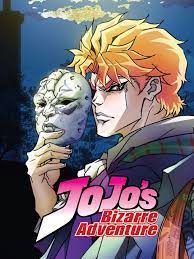 Jojo’s Bizarre Adventure (Japanese ジョジョの奇妙な冒険), also known as Jojo no Kimyo Na Boken, is a Japanese manga series that was written and illustrated by Hirohiko Araki. It was serialized in Shueisha’s shonen manga magazine as well from 1987 to 2004. It was later on transferred to the monthly seinen manga magazine Ultra Jump in 2005.

The series is divided into nine-story arcs, with each arc following a new protagonist with the nickname “Jojo”. Jojo’s Bizarre adventure is also Shueisha’s most extensive ongoing manga series when its volume is counted. It has been collected in a total of 130 tankobon volumes as of May 2021. In October 2012, David production took up the production of an anime series based on this manga. As of December 2021, the studio has produced five seasons. A live-action movie was also released based on its fourth part, Diamond is Unbreakable, in Japan in 2017. JoJo’s Bizarre Adventure is well-known for its visual style and stances, frequent references to famous Western music and fashion, and combat centred on Stands, psycho-spiritual manifestations with unique supernatural abilities.

This is set in 2011; Jolyne Cujoh is incarcerated for 15 years after he is involved in a car accident and is framed for murder. Her father gives her a pendant that causes a mysterious power to arise inside her. When a series of strange events occur, Jotaro warns his daughter that a student of Dio framed her in order for him to kill her in prison, and he urges her to flee. Jotaro’s stand disc and memory disc are stolen during a confrontation with one of Dio’s final servants, leaving him in a medically inactive state. With her newfound determination to save her father, Jolyne vows to track down the perpetrator.

The sixth season is known as Jojo’s Bizarre Adventure: Stone Ocean. It was released worldwide initially as a part of an original animation season that premiered on Netflix on December 1st, 2021. The series showed only 12 episodes, and the next 12 episodes are set to be released sometime in late 2022.

For now, we only know that Netflix has announced that episodes 13-24 will be released in general fall. We know nothing specific yet now. We can expect that it will be released sometime in September or October.

This manga is set in a universe where it is all a reflection of the natural world itself, but there is an extra tint of the existence of supernatural beings and forces. In this world, some people have the extraordinary ability to transform their inner spiritual powers into a stand. Another effective form of such energy is called Ramon, which is a martial arts technique that allows the ones channelling it to focus their physical energy into sunlight via their controlled breathing.

The narrative of this mangs Jojo’s Bizarre Adventure is divided into various parts, and each of them has independent stories, and each of them has different characters as well. Each of the new series’ main characters is a member of the Joestar family. The family’s mainline descendants possess a star-shaped birthmark which is located above their left shoulder blade. They all have names that can be abbreviated into the nickname: JoJo. The first six parts of the series take place within one single continuity. Its overall conflict and tension arise from a rivalry between Jonathan Joestar and Dio Brando. At the same time, the latter two parts are set in an alternate universe where the family tree of the Joestars is heavily altered.