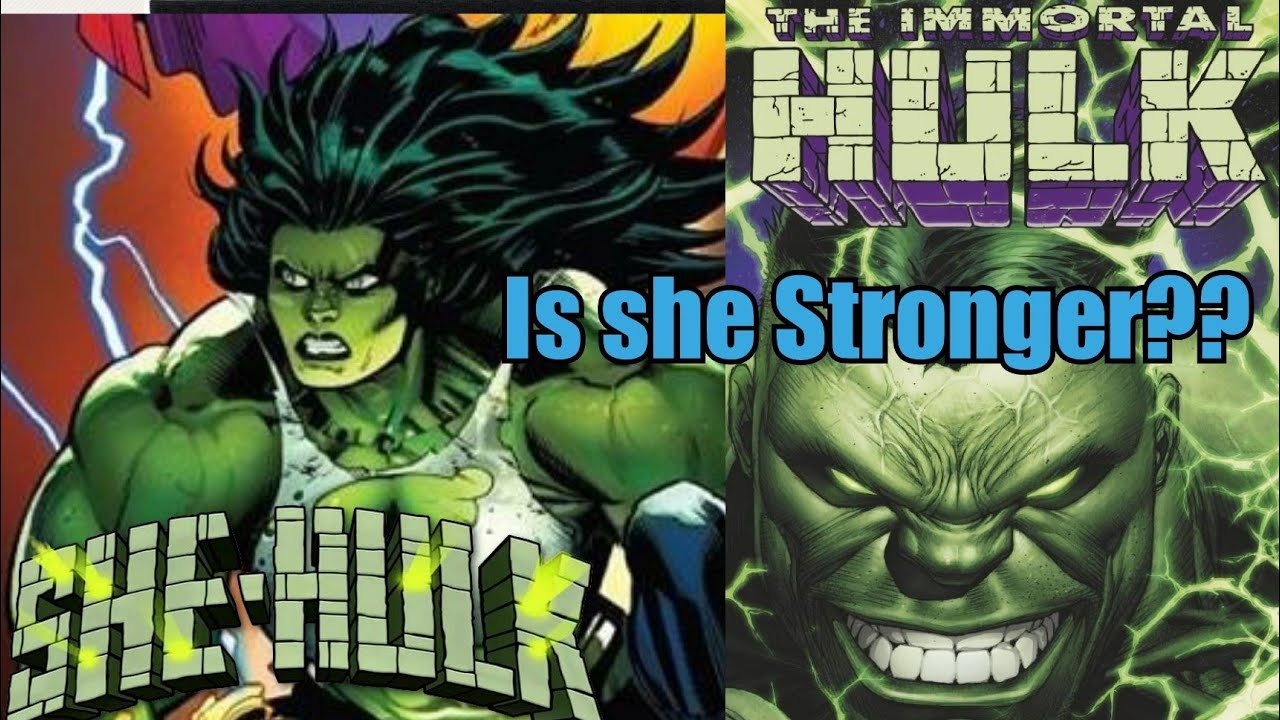 I know the character She-Hulk might sound new to some of you, it sounded the same when I was about to write about it. But as I read about this marvel comic character, her characterization was very interesting and exciting. Stan Lee and John Buscema created this character that appears only in the Marvel comic and not in the Marvel movie. let’s know Is She-Hulk Stronger Than Hulk.

Most of us are familiar with the character Hulk that appears both in marvel movies and marvel comics. Hulk is a character in Marvel who is exposed to gamma radiation and gains superpowers. He turns green when he becomes Hulk and, he considers himself the strongest avenger. She-Hulk is the cousin of Hulk, who because She-Hulk when Hulk gives his blood to her in an emergency.

She-Hulk is intelligent and strong in both human form and hulk form, though she became hulk only by a blood transfusion she is more intelligent than Hulk. Unlike Hulk, she is able to control her hulk form. All her villains are vulnerable and she has also fought with the avengers and fantastic four.

Hulk is the strongest because he weights up to 150 billion tonnes and he can break a whole planet but She-Hulk only weighs up to 70 billion tonnes. Both of their strength depends on their level of anger and Hulk’s intensity of anger is more than She-Hulk’s.

There are many instances where She-Hulk expresses her power but she is nowhere near to the power of Hulk. His anger is extreme and he fights vigorously when he transforms into a Hulk. She-Hulk risks her life unknowingly when she fails to use her power properly but she gets help to come back to life.

Also Read: Why Anime Are Banned In India?

Jennifer Walters and Bruce Banner are cousins and they met after a long time. There come to the criminals and they shoot Jennifer and she is admitted to the hospital. There she loses a lot of blood and Bruce decides to give his blood to her then both their blood fuses. And the radiations in Hulk’s blood fuse with Jennifer Walters’s blood and she becomes She-Hulk by blood transfusion.

This is the outline of the comic She-Hulk and in the later episodes she also confronts many villains and she shows her power to the world. It is disappointing that she does not appear in the movie and that is the reason for the unfamiliarity of her character among people. We can expect more interesting episodes of She-Hulk.

She is equally strong as Hulk and she is trained by Captain America. She also knows martial arts which makes her special to Hulk. But she can never become stronger than Hulk.

Obviously, Hulk is stronger than She-Hulk in most aspects and we can find evidence for this in the comic. Hulk is stronger because he has the capability to manipulate time and in avengers. He bears the power of the infinity stone. And defeats Thanos whereas She-hulk can only defeat the replica of Thanos.