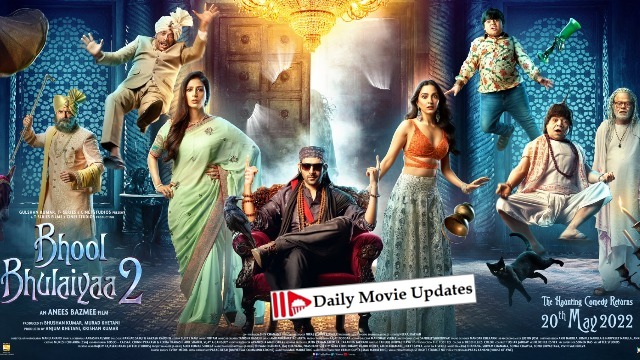 In 2007, a classic Hindi horror comedy film was released on the silver screen of Indian cinema. The movie became famous with the name “Manjolika” and the classical song “Ami Je Tomar”.Now You can remember which movie I am talking about. Yes, It is Bhulbhulaiya. let’s know more about Is Bhool Bhulaiyaa Based on a Real Story.

Directed by Priyadarshan and produced by Bhushan Kumar and Krishan Kumar, the movie was a remake of the Malayalam movie, released in 1993.

After Hera Pheri and Phir Hera Pheri ,  Akshay Kumar was back in Bhoolbhulaiya with his amazing humor level that create the magic and made the movie block bluster. Again in 2022,when the teaser of sequel 2 of that movie was released in theatre as well as in YouTube , fans were waiting eagerly to watch the movie.

The movie was supposed to be released a long time ago, in 2021but its date was delayed due to the Pandemic. Finally, It was released theatrically on the 20th of May 2022 and received appreciation.

The movie is directed by Anees Bazmee and written by Akash Kaushik.

The film was the sequel but not a remake .It’s plotline is totally fresh and to present that new version , new casts were introduced .In the  role of protagonist Kartik Aryan played as Ruhan Randhwa and Rooh baba, Tabu played both the role of Anjulika and Manjulika , then Kiara Advani as Reet Thakur.Rajpal Yadav returned as Chhote Pandit.Other casting are Sanjay Mishra as Bade pandit, Karmveer Choudhary as Mukhiyaji, Amar Upadhyay as Uday Thakur, Ashwini Kalsekar as Bade pandit’s wife.Govind Namdev as Tantric Baba Rajesh Sharma as Reet’s Uncle, Vyoma Nandi as Rajjo. The performance of supporting characters are as important as the main role.

The sequel to Bhool Bhulaiyaa opens with an elaborate sequence in which a baba, performs several occult rituals in order to imprison the strong ghost Manjulika. The residents of the haveli flee the home and relocate following the ritual in which Anjulika is attacked by the ghost.

Reet , Anjulika’s niece, meets a stranger named Ruhaan  on her journey back to Rajasthan eighteen years later. Following that, there’s some casual flirtation and romance.

Reet finds a secret about her cousin sister by mistake. Ruhaan is shortly taking Reet to the haunted haveli where Manjulika’s ghost has been imprisoned by her relatives.Then rest of the story follows the falsehood, trickery, stupid chuckles, and chills.

At the end of  the story Manjulika is  dragged up to the third floor by Anjulika’s spirit, who traps her in the same chamber she was held in eighteen years earlier. She speaks with her family and begs them to forgive Reet for proving her innocence. She expresses her gratitude to Ruhan for empathising with her grief when no one else could and for relaying her tale so that she could reconnect with her family. Manjulika screams for permission to leave. Manjulika screams as Anjulika requests the family to go since she has unfinished business with her sister. Like the last time, the family departs from the palace.

Is bhool bhulaiyaa 2 movie based on a true story?

Whatever, if the question will raised in you mind that bhool  bhulaiyaa 2 is inspired by true story or not , then the answer will be no.

Where to watch bhool bhulaiyaa 2 ?

As it was released recently, you can enjoy it in your nearby cinema hall.After that , it will be streamed on Netflix soon. Later, you can find it in any other online platform also.