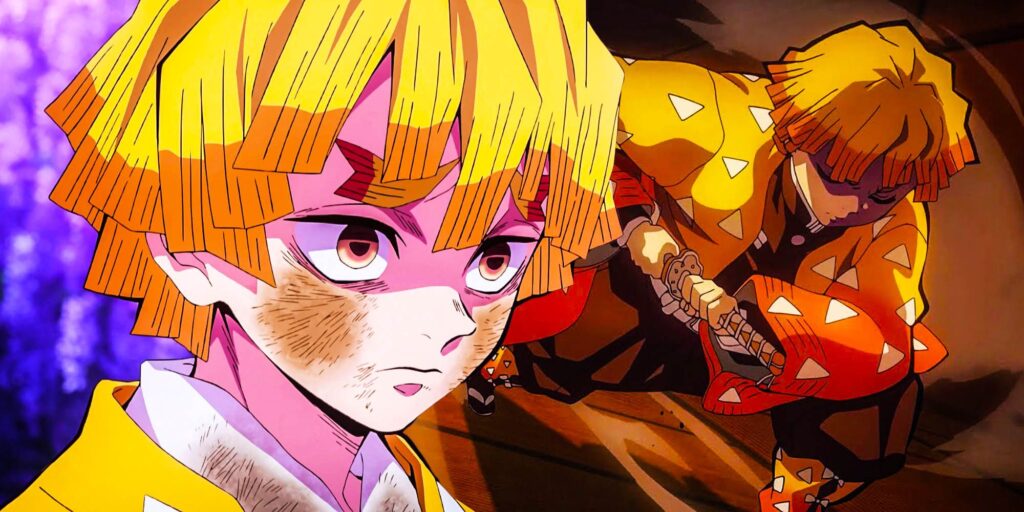 Does Zenitsu Die In Demon Slayer?

In episode 9 of Demon Slayer, we had to sit through watching a lot of our favorite demon slayers in bad shape, and the fear that Zenitsu might die kept us at the edge of our seats, biting our nails in anticipation. The episode was great indeed; without a doubt, however, we did have a huge scare about one of our favorite characters dying.

Does Zenitsu Die In Demon Slayer?

Zenitsu Agastuma is one of the primary protagonists of Demon Slayer. He is also a Demon Slayer and works in this secret organization in the Demon Slayer Corps. Zenitsu comes off as a coward, an average-sized young man with a slightly pale complexion, and his eyes exhibit fear. He comes off as a coward, and he sometimes keeps whining that he does not have much time left as the profession of being a Demon Slayer is deadly and requires a lot of strength and courage. Zenitsu has very low self-esteem. He looks at himself like he is someone worthless. He had once slain a demon, but somehow, he was convinced that it was Shoichi and not him; that is how unbelievable his own capabilities he is. Shoichi was a young child with no special talent for killing demons.

He is always living in fear, and he sobs and most of the time wants to run away at the mere sight of danger because he claims that he wants to live a simple and regular life and not this life where he has to run towards danger and then save lives and fight and kill demons. However, despite his flaws and intense desire to show himself and live up to the different expectations put on him by the people around him, he gives all the strength he has left.

Now coming back to the original question, does Zenitsu die in Demon slayer?

Towards the end of Demon Slayer, in the final arc of the series, the demon slayers face a lot of hardships in killing these upper-rank demons. This is also frustrating them a lot, and they are exhausted to the point where these six upper-rank demons almost take their lives. That is why we were scared about whether our Demon Slayers would die. these two demons named Daki and Gyutaro are making their life even harder, and these are strong demons as well. Now, our demon slayers are giving all they can but still, they cannot defeat them, and they can’t even cause minimal damage to Gyutaro. The demon still stood in good shape despite being given a lot of blows. Inosuke, one of the demon slayers was stabbed in the chest, and Tengen was lying on the floor. Tengen’s hands were chopped off.

To save Tanjiro, Zenitsu pushes him off the roof to save his life and to protect him from the upcoming obi attacks of Daki. He put his own life in danger so that he could save Tanjiro. The deadly attacks by Dabi also cut the whole house in half. This just shows how strong Daki is as a demon, and Zenitsu had to save Tanjiro from being killed by his fatal blows. Towards the end of the episode, it is shown that Zenitsu does try to escape the situation. However, he gets trapped while trying to escape the fatal attacks by Daki. This dramatically creates the illusion that this might be the end for him.

Zenistu does not die, however, in the end. Fortunately and to the dismay of Daki and other demons, Zenitsu survives. However, he gets trapped under the chaos and the debris of the fallen house. In the manga of Demon Slayer, we see that there is a lot left for Zenitsu to achieve and that he has a long way to cover. At that point, Daki and Gyutaru were merely two demons he had to fight against; shortly, as per the anime, he also fights Kaigaku, another upper rank six demons. Much to everyone’s surprise and even to his surprise, he defeats Kaigaku all by himself.

Later on, he also gets to fight against the Demon King named Muzaan Kibutsuji. It is also shown in the manga that with each fight, Zenitsu’s skills increase and improve and he keeps getting stronger and stronger. Zenitsu improves so much that he also becomes Hashira at the end, and he does not just fight with Muzaan. He is actually able to injure him with his attacks critically.

The series’ final arc had reached a turning point in Demon Slayer’s ending, as the countdown to sunlight had finally concluded. It had been a difficult hour for Tanjiro Kamado and the Hashira’s remaining members as they fought Muzan’s changing form to buy time until the final blow was delivered at daylight. After dawn, the Demon Slayer Corps tries to regroup. They finally kill Muzan once and for all, but many Hashira members perish. It is confirmed that Zenitsu Agatsuma, Sanemi Shinazugawa, Inosuke Hashibira, and Giyu Tomioka all survived and none of them died.

READ MORE: When Will Katakuri Come Back In One Piece?

Despite his disbelief in his powers, Zenitsu is one of the strongest characters in Demon Slayer. His actual strength wakes up ironically when he is asleep. His nerves normally prevent all his powers from slipping away and allow him to be very calm, shrewd, and pristine in his attacks. He decapitated the Tongue Demon and also defeated the Spider Demon as well.

Later, when Enmu, Lower Rank One, and Nezuko attacked, he was able to protect three complete railway wagons.

With the help of Inosuke, he could confront an awakened Daki and then blitz her with Thunderclap and Flash: God Speed.

The story of Demon Slayer is set in a secret society in Japan called the Taisho era, where the Demon Slayer corps are based. They have been on waging war against the demons for centuries; the people who work in it and kill the demons are called Demon Slayers. The demons are former humans who were transformed into demons by Muzan Kibutsuji, who is the Demon King as well. He transformed the humans into demons by injecting them with his blood. The Demons feed on humans while possessing supernatural abilities such as super strength, powers known as “Blood Demon Art,” and regeneration. Demons can only be killed by being decapitated with weapons made of the Nichirin alloy, injected with wisteria flower poison, or exposed to sunlight. The Demon Slayers, on the other hand, are entirely human; however, they use special elemental breathing techniques known as “Breathing Styles,” which give them superhuman strength and resistance. This aids them in their battle against demons. The Hashira are the most potent Demon Slayers, and one gets to be Hashira after much effort.

Demon Slayer, also known as Kimetsu no Yaiba, is one of the most famous anime and manga series. The manga was written as well as illustrated by Koyoharu Gotouge. It is about a teenager named Tanjiro Kamado who is diligent about becoming a demon slayer. Demons killed his whole family, and his younger sister became a demon herself. The anime series had a total of 26 episodes, and it aired in 2019 from April to September. The movie was released in October 2020, and it became one of the highest-grossing Japanese movies of all time.

Demon Slayer not only touches on familiar storylines and ideas, but even its title is bland and vague. However, it became one of the most enjoyable new anime releases in recent years.

Where To Watch Demon Slayer Online?

Demon slayer is available on Netflix and can be streamed and enjoyed there.

In this article:demon slayer, Does Zenitsu Die In Demon Slayer?