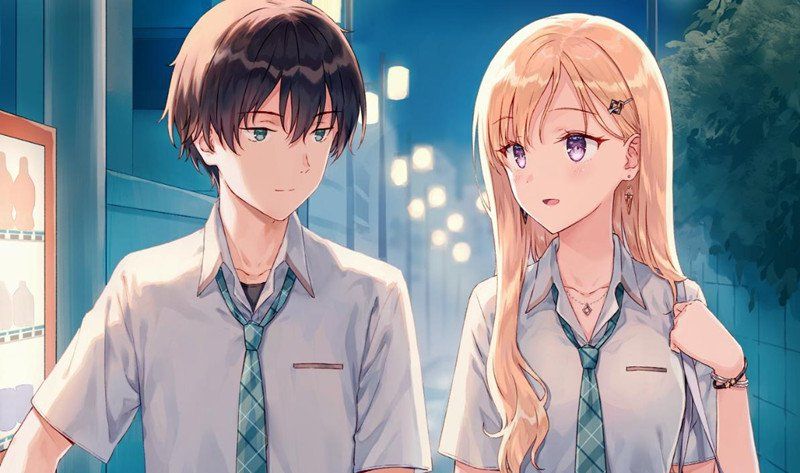 Days with my Step Sister

Many times, in the fandoms, anime watchers and manga readers clash as to what should be better. Is watching anime and letting the directors and the characters rule over you better than reading the manga and letting your own imagination work its wonders on your mind? Well, many a time, the fans complain that the anime has failed to completely encapsulate the essence of the manga, and so it is quite disheartening.

The world of anime is much smaller and very minuscule as compared to the manga universe. The manga universe is very expansive, some of them get adapted into anime and they do fare well, however, due to the number of manga we have, it certainly does not come as a surprise that a lot of volumes of the manga are yet to be explored. Sometimes, it is very easily understandable that very amazingly fantastic series has managed to go under the radar like, With the Light by Keiki Tobe, which has excellent storytelling, the artistic expression is another beautiful feature.

Further, the character development is also a very core part of it, it follows a mother trying to raise an autistic child, and it also chronicles the problems that she encounters during it. It also shows how society does not always understand what she needs. It is focused on a very niche topic, now we have a lot of shows that show autistic people and people with special needs being portrayed in the media s well. However, there are popular anime like Vagabond by Takehiko Inoue, that seems like it should not have been made into an anime at all.

Manga adaptations don’t always work as anime, but these mangas feel ready to make the leap from the page to the screen. Every season, new manga adaptations appear on the anime scene, so it’s entirely possible that the shows on this list – and other fantastic manga out there that don’t yet have an anime adaptation – will see a second life in anime form someday. Such is the case with light novels as well.

Another such case is with an upcoming anime named ‘Days with my Step Sister’. Does the spewing rivalry with hidden love between you and your sibling is ruining your life too? Well, then this anime is going to be the perfect thing to relate to. This might also give solutions to your problem too.

Gimai Seikatsu (Japanese- 義妹生活), is a Japanese mixed-media project, that was created originally by Ghost Mikawa. It started with a youtube channel that was created way back in April 2020, it uploaded its first video on the 1st of May, 2020. The light novel is written by Ghost Mikawa and illustrated by Hiten. In January 2021, Media Factory began publishing the series under their MF Bunko J imprint. Yumika Kanade’s manga adaptation began serialisation online in Kadokawa Shoten’s Shonen Ace Plus in July 2021. A new anime television series has been announced recently.

Now that we know that there is going to be an anime adaptation, the next natural question to be curious about is the release date. However, sadly we do not have any official date for its release yet.

We still have to get the other details like the studio that will adapt it, or the date of the release, the new trailer is out for it. You can check youtube for the trailer.

The trailer is voiced by Saki Ayase, and she is basically narrating the story of how she came to live with her classmate who is now her stepbrother. They have agreed to maintain a proper distance, something that lies and bridges well between not too distant and not too close either.

READ MORE: Misa And Light: Who Is The Best Kira?

The Youtube web anime in its various episodes features an ensemble of voice casts, that includes Kouhei Amasaki who voices Yuuta Asamura and Taichi Asamura, then we have Yuki Nakashima who voices Saki Ayase, and Daiki Hamano as Tomokazuu Maru, further we have Ayu Suzuki as Maaya Narasaka, then finally we have Minori Suzuki and Eriko Hara for Shiori Yomiuri and Akiko Ayase respectively. These voice actors will reprise their roles for the television anime series as well.

The story is about Saki and Yuta who were classmates but now they have to live together as step-siblings. Saki has always been devoid of familial connection and she has been starved of familial love, but despite that, she doesn’t dare to ask for it. both Saki and Yuta have had terrible and traumatic childhoods, and this is a world where they cannot rely on anyone else. Their life is very lonely, so now they must learn to live with each other and rely on each other too.

We all agree with the fact that suddenly encountering the fact that you have new parents. It can also be one of the most difficult and uncomfortable parts of anyone’s teenage life. Such is the case for both Saki and Yuta, they might try to deny their new relationship in the school, but that does not mean that they are not affected by all these sudden turns their lives took. Can they maintain a regular disparity all the time? will they try and come to accept life as it is, and out of their control?

Saki has always been a very distant and keeping to herself kind of person, so she encounters regular difficulties in opening up to anyone. While Yuta sees and knows this, he is dumbfounded when it comes to the question of how to comfort her. However, they do gradually come close and then learn how to be at ease around each other and how to find comfort in each other’s company.

Days with my Step Sister Manga

It is published by Kadokawa’s Media Factory under the MF Bunko J imprint. As of July 2022, five physical volumes had been published, with a sixth volume set to be released on August 25, 2022.

The artwork that was used in the manga adaptation was created by Yumika Kanae, which debuted on July 16, 2021, and was serialised in Kadokawa Shoten’s Shonen Ace Plus online magazine. So far, only one tankobon volume has been released.

Previous work by Ghost Mikawa includes My Friend’s Little Sister Has it in for me! it is also a light novel series. This one also got its own anime adaptation that was announced in January 2021.

Days with my Step Sister Story

Yuuta Asamura has a new stepsister suddenly after his father remarries, her name is Saki Ayase, and she happens to be the number one beauty of the school year. They promise each other that they will not be too close and not too far either, not to be too opposing, and to simply keep a vague but very comfortable distance, having learned important values about men and women’s relationships from their parents’ previous ones, they decide to not repeat their mistakes.

Saki, who has worked alone for the sake of her family, doesn’t know how to properly rely on others, whereas Yuta is unsure of how to truly treat her. However, now that they are standing on fairly equal ground, these two gradually learn the comfort of living together. Their relationship gradually evolves from strangers to friends as the days pass.

Days with my Step Sister Characters

Yuta Asamura– is the protagonist of the anime and the light novel; he is also the stepbrother of Saki Ayase. He is voiced by Kohei Amasaki.

Saki Ayase- is another protagonist and the step-sister of Yuta. She is voiced by Yuki Nakashima.

Tomokazu Maru– is Yuta’s classmate and only friend. He is a member of the baseball team and also an otaku. He is voiced by Daiki Hamano.

Maaya Narasaka– she is voiced by Ayu Suzuki. Saki Ayase’s schoolmate is always upbeat and meddling. She became increasingly involved with Saki because she couldn’t stand seeing her alone, and she eventually became her friend. They are frequently seen together at school.

Taichi Asamura– is Yuta’s biological father and now Saki’s step-father. He is voiced by Kohei Amasaki.

Akiko Ayase– she is Saki’s biological mother and now the stepmother of Yuta. She is voiced by Eriko Hara.

Shori Yomiuri– She is voiced by Minori Suzuki. She is a university student and works as a part-timer as a senior in the same bookstore where Yuta works.

This series will have very important familial nuances in it and hopefully will be a fun watch. You can read the manga on Mangabuddy.