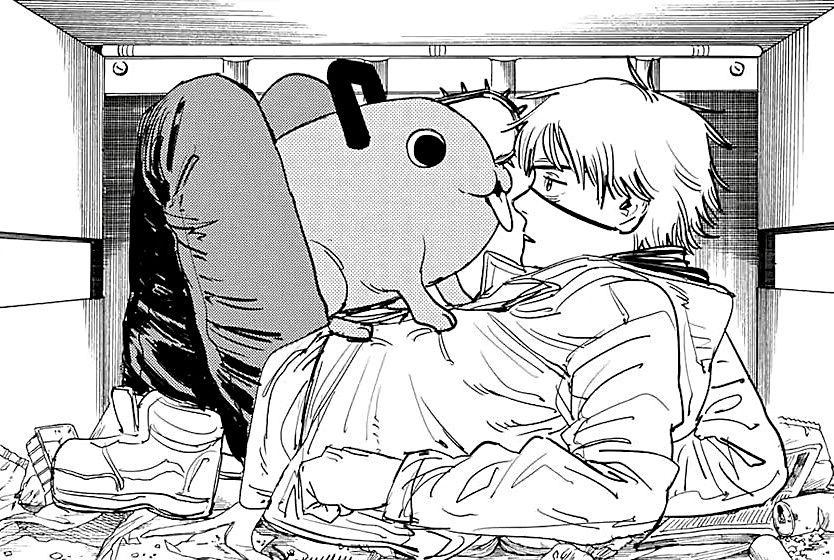 Chainsaw Man (Japanese チェンソーマン), is a Japanese manga series that has been written and illustrated by Tatsuki Fujimoto. The first part of Chainsaw Man was released in the Weekly Shonen Jump, which is a Shonen manga magazine by Shueisha. It was released way back in December 2018. It ran till December 2020. The second part began its serialization in the Shonen Jump+ online magazine in July 2022. All of its chapters are collected in the eleven tankobon volumes as of March 2021.

The manga is licenced in English by Viz Media for both print and digital release in North America, and it is also published by Shueisha on the Manga Plus online platform. MAPPA’s anime television series adaptation is set to premiere in 2022. The manga had over 13 million copies in circulation as of June 2022. Critics have generally praised Chainsaw Man, praised its storytelling and characters, and highlighted its violent scenes within the context of the story.

In chapter 99, we saw that Asa Mitaka came face to face with the War Devil. The chapter was titled “Two Birds”. There wasn’t much of what we usually saw, like blood, gore or any kind of violence. It was a peaceful episode. The War Devil also talked things through with Mitaka, who was still surprised to even be alive. She was also very reluctant to go to school, but the War Devil forced her to do so. This episode once again lacks Denji, but it does introduce some new characters (one of them might be an old one).

The War Devil will decide their fate, but I believe it is too soon to go that route because the War Devil has other plans for Chainsaw Man. Mitaka will embark on a devil-hunting mission with the black-haired boy she previously met and a new glasses-wearing girl. This is the trial for membership in the Devil Hunters Club. In the following chapter, things will become even more tangled. What has been particularly aggravating is not being able to see Denji for the past two weeks. His arrival is eagerly anticipated, and I believe Fujimoto is planning a grand entrance. I doubt we’ll see him next week because the next chapter will be about the devil hunt.

Asa Mitaka awakens in her room, surprised to find herself alive. The War Devil is seated beside her. Mitaka believes it is all a nightmare, but the War Devil assures her that it is not. It orders her to go to school right away; if she refuses, it will kill her. The War Devil tells her about the murder they committed the night before. It’s making headlines. Mitaka discovers that the devil is merely a hallucination in her mind. It informs Mitaka that it has taken over her body and that the War Devil has claimed it.

Mitaka inquires about her body’s continued movement. The War Devil tells her that because it knows nothing about human society, it kept half her brain intact. The War Devil wishes to visit Mitaka’s school because it discovered that Chainsaw Man attends that school anonymously.

Mitaka comes to a halt when she arrives because she does not want to enter. After what has happened, she is afraid to go to school. The War Devil warns her once more that she will be killed. She is unconcerned about it. A boy appears out of nowhere and offers to take Mitaka to the nurse’s room. Hirofumi Yoshida is his name, though it is not revealed in the chapter. War Devil instructs her to inquire about Chainsaw Man. She declines to indulge in this, so it then takes control of her body and then asks him about it.

He informs them that he is new to the school and has heard that Chainsaw Man may be a member of the devil hunter club. After a brief pause, the War Devil proposes that the boy be her boyfriend. He politely declines and walks away. The War Devil reveals that it can transform anyone or anything into a weapon. It intends to raise a massive army of humans to fight Chainsaw Man.

They join the devil hunter club, where new students are assigned the task of hunting a devil and presenting it to them. Only those who achieve this are eligible to join the club. Mitaka is paired with a girl who wears glasses and Hirofumi Yoshida.

The main characters are Denji, Makima, Aki Hayakawa, Asa Mitaka, and a lot of devil hunters who we see in the course of the chapters.

The setting of the story is in the kind of world where Devils are born from the fears that humans have. Devils are usually very dangerous and malicious. Their power is proportional to the fear they induce in humans. However, humans can form contact with them in order to use their powers. The people who specialize in hunting and employing the devils are called Devil Hunters.

The devils originate from hell and exist in a cycle between earth and hell. They migrate towards the earth when they are killed in hell, and vice versa. In hell, the devils who were never killed reside, they are called Primal Fears. Under certain conditions, a Devil may inhabit the body of a deceased human, gaining some of their memories and personality; such a creature is known as a Fiend. Humans are said to be benevolent to devils who naturally have a humanoid form.

The story takes place in 1997, in an alternate timeline in which the Soviet Union still exists and many events, such as the Holocaust, do not appear to have occurred.

Denji is a young man who is marred by poverty and is working off of his dead father’s debt to the Yakuza when he worked as a devil hunter. He was aided by Pochita and a chainsaw devil. Denji is later betrayed by Yakuza, who killed him for a contract that was between the Zombie Devil. Pochita also makes a contract with Denji and then merges with him as a hybrid of a human and a devil.

Then Denji shows Pochita all his dreams. He also massacres the Yazuka and then is persuaded by a few governmental Devil Hunters, to join their ranks. Denji agrees and teams up with Power, the Blood Fiend, and Aki Hayakawa, a self-destructive Devil Hunter. Makima offers Denji any favour in exchange for killing the Gun Devil, the perpetrator of the greatest massacre in human history.

Denji’s group comes across another hybrid, the Katana Man, a vengeful yakuza who appears to be allied with the Gun Devil and kills a large portion of the Division. Kishibe, a master Devil-hunter who distrusts Makima, trains Denji and Power; Aki strikes a deal with the Future Devil, who predicts a “horrible death” for him. The Division launches a counter-attack and captures the Katana Man. Then the story hence progresses.

In this arc, we see Asa Mikata, who is a loner in her high school. One day, her homeroom introduces her to one Bucky, who is a chicken devil and has the class host him for 3 months. At the end of three months, the class can either kill him or spare him. But due to attachment, the class spares him. Bucky encourages Asa to come out of her shell but is tragically killed when Asa trips and squishes him while carrying him.

Later, her teacher and one of her classmates pay her a visit to console her. It was later revealed that her classmate struck a deal with the Justice devil because she was in love with her homeroom teacher, who was also in love with Asa. She murders Asa out of jealousy, but at the last moment, the war devil appears and takes over her body, allowing her to murder the newly born justice devil. Asa now sets out to kill Chainsaw man, who is revealed to go to her high school, on the condition that the war devil leaves her body once she kills him.

READ MORE: Misa And Light: Who Is The Best Kira?