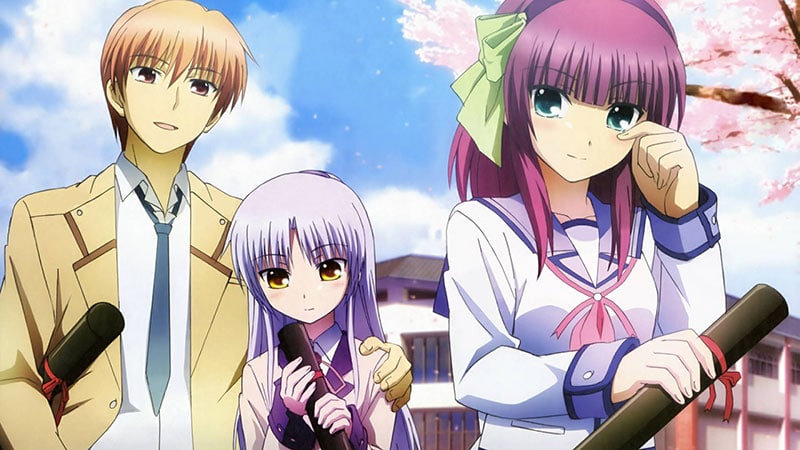 While the popular anime Charlotte did not make our list of must-see anime this season, watching it has inspired me to revisit other works by writer Jun Maeda, most notably his 2010 hit, Angel Beats.

What is the anime about? Well, the anime Angel Beats is the story that follows a group of deceased teenagers who are “living”, ironically in a purgatory high school world while waiting to be reincarnated. When the recently deceased boy Otonashi returns to the world, he discovers it to be more of a warzone than a school, as the teens have rejected the idea of leaving this life and instead battle the Angel who serves as the student council president.

There is no official information available yet. The main issue with Angel Beats’ second season is that it was never planned to have one. The conclusion is definitive, and it isn’t much else they can do with the plot other than an entirely new cast or a prequel. This anime series appears to have concluded.

This does not, however, rule out the possibility of additional franchise entries. During the previous decade, Angel Beats! was a popular series. P.A. Works can always return to it if they need money for something, such as making an OVA or a film. It wouldn’t surprise me if this series sold well, but I wouldn’t bet on it.

Angel Beats is a thirteen-episode Japanese anime series that has been produced by P.A. Works and Aniplex in solidarity. It has been directed by Seiji Kishi. The story initially was conceived by Jun Maeda, he has written the screenplay and composed the music group with the group named Anant Garde Eyes, the original character design has been done by Na-Ga. As a matter of fact, both Maeda and Na-Ga belong to the visual novel brand named Key, which is the name behind producing the titles like Kanon, Air and Clannad.

The anime first aired in Japan on the CBC,  from April 3 to June 26, 2010. In December 2010, an original video animation (OVA) episode was released, and a second OVA episode was released in June 2015. Dengeki G’s Magazine and Dengeki G’s Comic also featured four manga series, two of which were illustrated by Haruka Komowata and two drawn by Yuriko Asami. Between the November 2009 and May 2010 issues of Dengeki G’s Magazine, a series of illustrated short stories written by Maeda and illustrated by GotoP were serialised in it as well.

Angel Beats, the critics gave it generally positive reviews The integration of various individual elements, such as musical performances, humour, and action was praised in one review but panned in another, with one critic claiming that the story was overloaded with too many elements. The animation of the action sequences and the attention to detail with the weapons used were praised by P.A.Works. The length of the anime, however, was a major flaw as has been contended by critics, they said that since it had a very brief run, the back stories and the origin stories of many characters were left unexplored. In 2010, the awards jury of the 14th Japan Media Arts Festival chose the anime as a recommended work.

Angel Beats! is set in the afterlife, in a kind of limbo for people who have experienced trauma or hardships in life. It is set in a place where in order to be reincarnated or to pass on in the dead world, you have to overcome all the trauma and hardships that you have faced in your life when you were alive.

Yuzuru Otonashi, is a young boy suffering from amnesia, he also ends up in the afterlife. Yuzuru is also the protagonist of the story. He meets another person, a girl named Yuri Nakamura, who further then invites him to join the Afterlife Battlefront (, Shinda Sekai Sensen), or SSS, a group she founded and leads that rebels against an unseen God for their unfair life circumstances. Angel, the student council president with supernatural abilities and thought to be God’s associate, is their adversary.

After joining the SSS, Otonashi also gets to meet and introduce himself to other members that including co-founder Hideki Hinata, lead vocalist of the four-girl rock band Girls Dead Monster (GDM), and Yui, an underclassman and fan of GDM. Aside from SSS members, the afterlife is populated by fabricated students and teachers, referred to by Yuri as “non-player characters” (NPCs).

Despite his doubts about the morality of their actions, Otonashi participates in several SSS operations and missions. Iwasawa passes away in the afterlife after finding fulfilment through her music at one of GDM’s diversion concerts. After the SSS successfully demotes Angel, Otonashi partially regains his memories thanks to hypnosis performed by deputy president Ayato Naoi. Later, he befriends Angel, the real name Kanade Tachibana, and recalls spending the rest of his life with her.

Otonashi assists her in making peace with the SSS and discovers the true purpose of the afterlife. He then offers to assist Kanade in assisting other SSS members to pass on, and Kanade is reinstated as student council president as part of their plan. Hinata and Naoi join them, with the former assisting Yui in moving on by fulfilling her desire for marriage.

Mysterious shadow-like entities begin to appear, attacking afterlife residents by transforming them into NPCs. Otonashi talks to the other SSS members, and many of them choose to die than become NPCs. Yuri eliminates the source of the shadows, which were created by computers programmed to activate when love was detected in the afterlife in order to keep it from becoming a paradise. Her feelings for the SSS members allow her to finally overcome her regret, and by this point, the only ones who have not died are Otonashi, Kanade, Hinata, and Naoi. Before Naoi, Yuri, and Hinata leave, the five remaining students hold a graduation ceremony, leaving only Otonashi and Kanade.

Otonashi admits to Kanade that he has fallen in love with her and wishes for them to remain in the afterlife to assist others in moving on. Kanade, on the other hand, reveals that her regret was not being able to thank her heart’s donor, Otonashi, for saving her life. Otonashi is heartbroken after she thanks him and leaves him in the afterlife. Later, in the real world, two people who resemble Otonashi and Kanade cross paths on the street. In an alternate epilogue, Otonashi becomes the president of the high school’s student council and assists lost souls in their journey to the afterlife while waiting to see Kanade again.

Angel Beats: Is it Worth Watching or Not?

Angel Beats is one of those anime that will either completely captivate you or leave you scratching your head, wondering what the hell you’re watching. You either love the over-the-top humour, followed by insane action, and finally crush your heart drama, or you find the whole thing an exercise in emotional manipulation that falls short.

It is a good, light-hearted anime that will make you laugh and emotional at times too. It understands how to deliver moments. The overall narrative pacing and plot may be a bit jumbled with too many characters and, at times, too many ideas, but each of those character moments is so beautifully spaced throughout the series that every time you think you might want to stop watching, you’ll be hit with something truly stunning and unforgettable. What you’re left with is a series in which the overall feeling outweighs the majority of the individual parts.

The main characters are:

Yuzuru Otonashi- He is the protagonist. He has had a very troubled life, and he became pretty sensible and sensitive too. He is an orphan too. The story follows him throughout. He is voiced by Hiroshi Kamiya.

Yuri Nakamura- She has been voiced by Harumi Sakurai. She has a determined and protective personality.

Kanade Tachibana- She is voiced by Kana Hanazawa, and she is the president of the SSS.

Then we have other characters like Hideki Hinata (voiced by Ryohei Kimura), Ayato Naoi (voiced by Megumi Ogata), Yui whose voice was given by Eri Kitamura. Yui is a huge fan and worked as an assistant for Girls Dead Monster at first. She is known to be hyperactive and to speak very quickly.

So, for now, you can watch the first season of Angel Beats and enjoy and wait for further news and more exciting news.